Aircraft traces in the sky

Contrails are long and narrow traces of condensation caused by super saturation of water vapour. This is caused mostly by het exhausts, but there are cases when aerodynamic effects (wing tips or otherwise) contribute to contrail formation. They have a life time that varies between minutes and hours, and may evolve into high-altitude cirrus clouds. A considerable amount of research exists on this environmental problem.

Distrails are deep scars in the cloud system by aircraft flying at relatively low altitudes, mostly on final approach and landing. Distrails are less common and are not studied at the same level as contrails. 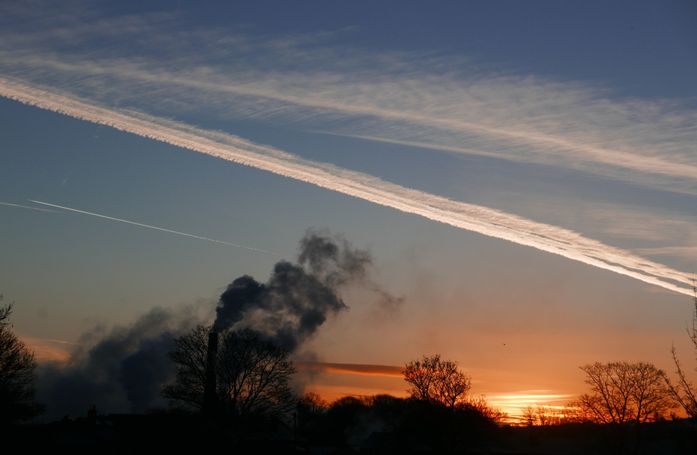 FLIGHT-X has the ability to estimate contrail probability at cruise, and provide optimal flight paths to minimise contrail avoidance. This is done by a combination of climbs and descents where there is the possibility to do so, theoretically as in the figure below. Currently, changes in heading and go-around are not considered.  One such demonstration is found in this paper.

Aircraft flying at the edge of the clouds cause both distrails and large tip vortices, such as in the case below.

Enquiries
We welcome enquiries to discuss your professional needs, projects, data or training.